How To Increase VRAM In Windows 11

Computer memory is very important if you want to get to applications and programmes quickly. The computer memory, or RAM, is used by the system processor to keep the data safe and sound. Is memory on a computer board that isn’t permanent. It stores the operating system and other programmes so that they can be found quickly. Your computer’s processor is always moving data from the hard drive to the RAM before it can be used. It’s also possible that you’ll need to buffer a high-quality video, 3D structures, and new games on your Windows PC.

What exactly is dedicated VRAM?

Graphics-heavy apps and programmes use a lot of system memory to show graphical data in high quality, colour, clarity, and definition on the screen. You might have a hard time buffering high-intensive graphics programmes because your graphics card shares the system’s RAM with other parts of your computer. Most of the time, unless you need to buffer high-end video apps, your PC works with the RAM. Other than that, if you want to buffer the high-quality visual display to your computer’s screen, you’ll need a special type of memory called Video RAM (VRAM). 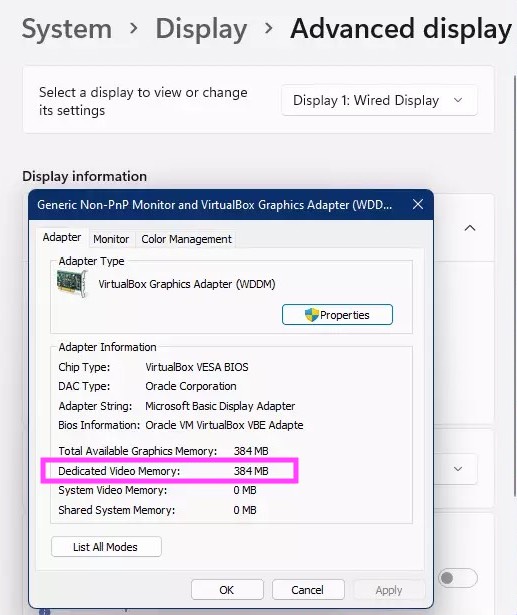 Video RAM is a special type of RAM that is used to process high-intensity video faster than the system RAM, which is used for other things. This is called Video RAM (VRAM), and it’s built into graphics cards or GPUs to store the images and video data that they make. Virtual RAM is also called “virtual RAM.” It is used by the GPU to store graphics applications, games, complex textures, and 3D graphics quickly.

This isn’t always true, though. Some new games and videos may require you to play videos at 1080p or 4k resolutions that require a lot of VRAM. Furthermore, the VRAM processes more pixels for high-resolution images so that they can be shown better. If you don’t have enough VRAM, your GPU will be overloaded when you play modern games.

Also Read:9 Fixes For Outlook Not Connecting To Server Windows 11

Why would you require VRAM?

If you don’t have enough VRAM, you won’t be able to play the most up-to-date games. Having a lot of VRAM is important in this case. For high-resolution images and complex textures to load quickly, you may need to add more dedicated video RAM to your graphics card.

Afterward, we show you how to change the amount of video RAM on your Windows 11 or 10 machine. There are two ways you can change the Windows PC’s BIOS setting or registry setting to change how much of the system RAM is used for video.

Check the amount of VRAM on your graphics card to see how much space it has.

This feature is found on all CPUs and BIOS. If this method doesn’t work, move on to the next one.

The first method is the easiest and works with all CPUs and BIOS. You can also use Registry Editor to increase VRAM in Windows 11 by following the steps below.

You can now restart your computer to make the changes take effect. Then, you can try out the software or games to see how they work.

Can you put RAM into VRAM?

This might happen by itself if you want to add more VRAM by taking some of your Physical RAM and giving it to the VRAM. Because VRAM is much faster than physical RAM, this may not have a big effect on how quickly you can do things. Do not do it yourself. Let the system work for you.

How much RAM do built-in graphics use?

It will change. Memory for integrated graphics cards doesn’t come from its own banks. Instead, it comes from the hard drive. This depends on how you use it. Making a video will take up more memory, but when you play it, it will be a lot less.

How much RAM should I give to the built-in graphics?

If you’re given the choice, you can set up some of the RAM to be used for the computer’s built-in graphics. However, don’t spend a lot of time on them. As of right now, you need at least 8 GB of RAM. It’s better to have 8GB of RAM than 16GB, so you should set up 1GB of RAM. If you have more RAM, you can set up 4GB of RAM.

This post told you how to find out how much vRAM or Dedicated Video Memory your computer has. You can do this in Windows 11. However, if your computer can run a lot of graphics-heavy apps but you want a smoother result, you should increase your VRAM.

Another important thing to keep in mind is that you shouldn’t expect too much from integrated GPUs. In spite of having more VRAM, integrated GPUs still won’t be able to make games look good and run quickly, even with more VRAM.

This means that dedicated GPUs are the best way to get the most out of your games.