Breakout rooms in Google Meet allow moderators to break up a video conference’s attendees into smaller groups. The idea behind this feature is that you can create some sub-groups within the main video meeting. Additionally, all the sub-groups will be independent and cannot see or hear the other groups. This is a useful feature. So, let us learn how to create breakout rooms in Google Meet.

How to Create breakout rooms in Google Meet

Note: While Google Meet is free, customers with a paid, upgraded version of the service, such as Google Workspace Essentials or G Suite for Education, have access to the breakout room function.

Note: Participants may seek your assistance after they are in their breakout rooms. A notice will appear inviting you to join their room; select “Join” to join or “Later” to join later. Above rooms that have called out to you, a banner saying “Asked for help” will appear.

Also Read: How To Create Breakout Rooms In Google Meet

Now, let us discuss these steps in detail:

2. Now, you will see a shapes or Activities icon on the bottom right or upper right corner as shown below in the screenshot.

3. Now, click on this icon and choose breakouts room.

5. You can choose the number of breakout rooms, set the timer for these rooms and even shuffle the group members from one group to another. If you click on clear, all the rooms will be emptied.

6. You can enter a members’ room directly into the group or drag and drop the participant’s name. To shuffle randomly, click on the shuffle icon.

7. After everything is set, you can click on Open Rooms and all the Breakout Rooms will be created. Before they may be added, participants must confirm that they want to “Join” rooms. 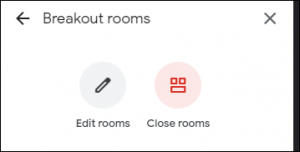 How to End or Close Breakout Rooms?

Note: Participants will notice a 30-second countdown before the rooms are closed when the timer is ready to run out or you manually close them.

So, that’s all for now. This is how you can easily create breakout rooms in Google Meet. After creating breakout rooms, you can even edit them or join a Breakout room if you want. Steps to do this are also mentioned in this piece of writing. Moreover, if you want to close rooms manually, you can do that effortlessly in no time. So, go ahead and create Breakout rooms for better discussions. If you face any issues while doing so, kindly let us know in the comment section. We would love to help you.

Harshaurya Kaur - November 7, 2022 9:1 pm 0
Apple may have halted its contentious attempt to scan customers' iPhones for photographs of child...

Harshaurya Kaur - November 1, 2022 10:1 pm 0
Not only can you save important information on your phone, but there are also applications...

You Can Identify Any Song Just by Singing It: Here’s How