Google Drive flags folder containing only “1” as a copyright infringement.

According to one Google Drive user, the file contained nothing but the digit “1.”

”1″ as a copyright infringement 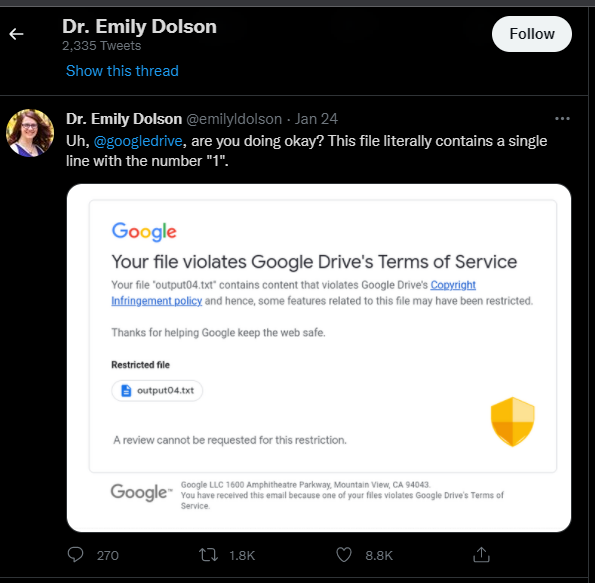 An anonymous internet user also share screenshots of their google account where Files containing only the digit “1”—with or without newline characters were flagged.

It seems that the same behavior isn’t confined to files that contain the number “1.”

While uploading many computer-generated files to Drive, Dr. Chris Jefferson, Ph.D., an AI and mathematics researcher at the University of St Andrews, was able to duplicate the problem.

Jefferson wrote,” “I deleted the experiment, just in case I got my account deleted for too many naughty numbers,”.

Google’s automatic technique of flagging possible copyright infringement possibilities, according to Mikko Ohtamaa, founder of Defi startup Capitalgram, could be problematic with aspects of the GDPR(General Data Protection Legislation) regulations.

However, as noted by the UK’s ICO, GDPR Article 22 aka “automated individual decision-making, including profiling” refers to making automated judgements about individuals based on their online conduct, such as before providing a loan or when making recruiting decisions.

HackerNews user OneLeggedCat writes, “I’d have more sympathy if it weren’t ‘A review cannot be requested for this restriction'”. The user adds, “It’s designed to be as brutal and draconian as possible. They chose this. It is guilty until proven innocent, with no recourse.”

Apparently, there is something wrong with the Google drive that it flagged folder containing only “1” as a copyright infringement. Fortunately, the drive team took note of the issue and responded to Emily Dolson on Twitter. 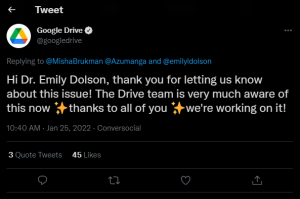 “Hi Dr. Emily Dolson, thank you for letting us know about this issue! The Drive team is very much aware of this now thanks to all of you we’re working on it!”, wrote Google Drive on twitter.

We are waiting for more clarification and will let all our users soon about this. Keep Reading