In this article, we will explain how to take and share screenshots and video clips on Oculus Quest.

Most gaming consoles provide you with a method of recording your gaming session, and so you also expect that from Oculus Quest 2. Interestingly, your Quest and Quest 2 are armed with ways that let you take screenshots and record videos of your virtual reality experience. Besides this, you can also share them with your friends.
If you are interested in finding out how to taken share screenshots and video clips on Oculus Quest, keep reading the article till the end.

Also Read: How To Play Roblox On Oculus Quest 2

Quest provides you with different ways to grab the screen in the form of a JPEG image. Let’s discuss the best ways to do so.

Use Shortcuts to capture Screenshot

Your Quest gives you a shortcut button combination that provides the quickest way to capture the screen.

For this, look for the Oculus button on the right controller. While holding this position, quickly press the trigger on the left controller. The trigger button is the one on which your index finger rests. As soon as you will do it, a tone and a notification will appear on the screen. It will notify you have successfully taken the screenshot.

Note: refrain from pressing the Oculus button for a long duration as this will re-center your view.

If you are a resident of the United States, and the device language is set to English, your Quest will have a Voice Assistant that performs tasks as you dictate it.

Apart from launching apps and accessing settings, you can use it to capture screenshots.
To ask your Voice Assistant on Oculus to grab screenshots, you will have to summon it first.
For this, hit the Oculus button on the right controller twice and then dictate the take a screenshot command as soon as you see the Voice Assistant window.

Also Read: How To Set Up Virtual Desktop On The Oculus Quest 2

Capture Videos on the Oculus Quest

Now that you’ve captured the screenshots, it’s time to record a cool virtual reality experience try to show it off to your friends. There are several ways to record video clips on your Quest. Let’s check them out one by one.

The most popular way to record on Quest is using the inbuilt option on the Quest menu. Here is what you need to do:

You can also access these options directly from the game panel.

Also Read: How To Play Minecraft On Oculus Quest 2

Sharing Screenshots to a PC

The simplest way to share your captured media is to transfer it to your computer. For this, you will have to connect your headset to your PC via a USB cable.

Now wear your headset back on and authenticate the connection in the pop-up. As soon as you will do it you can see the headset listed under the attached devices in Windows File Explorer or Mac Finder. You can access the screenshot and video shots folder to see all the captured media.

Now copy these files using the control+C and control+V shortcut keys into any folder on your PC. Now you are free to upload the videos on any platform of your choice such as YouTube. 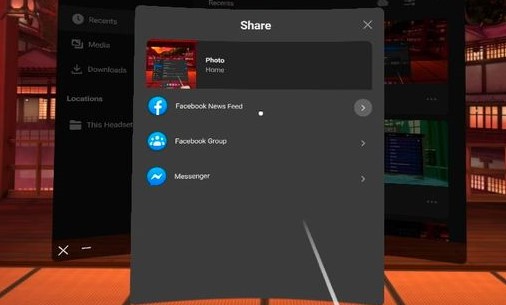 To share to other social media, you’ll need to use one of the above methods and post your videos or images using a separate device.

Also Read: How To Enable Cloud Saves On The Oculus Quest 2?

Hope now is clear how to capture and share screenshots and videos on your Quest 2. So go ahead and record your gameplay to show off to the world! Hope this helps!