iPhone13: 5 Features You Need To Check Out Right Now

Also Read: How To Enable And Use 5G On Your iPhone 13 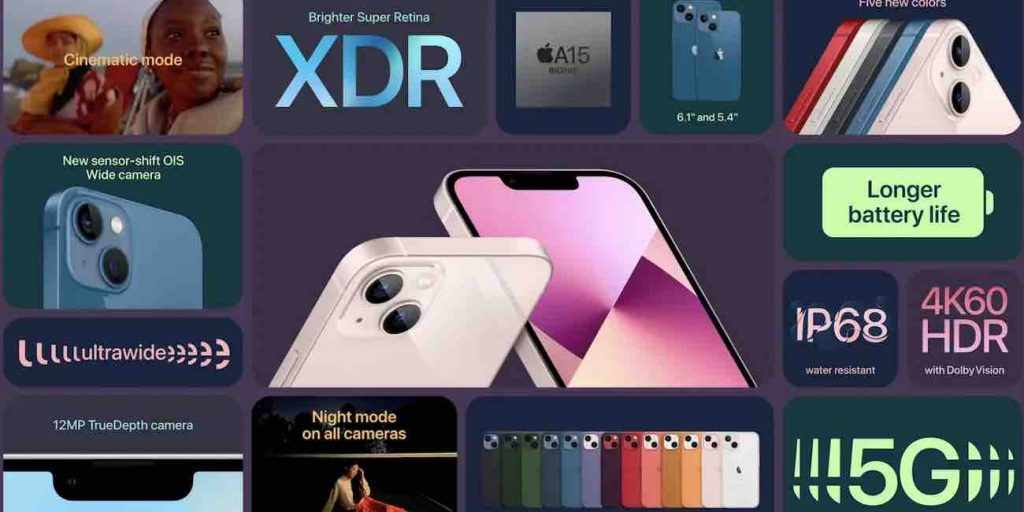 What are the new iPhone 13 Features?

While the iPhone 13 may seem to be somewhat identical to the iPhone 12, it has several new innovations that improve the phone’s most critical features, such as the camera, display, and CPU.

Also Read: No Sound On iPhone 13? Here Are The Possible Fixes

The iPhone 13 now has the same bigger wide camera sensor as last year’s iPhone 12 Pro Max. This translates to a 1.7-micron pixel sensor that collects 47% more light, improving low-light performance. Although the ultra-wide camera’s specifications are comparable to those of last year’s model, Apple claims it is also new. The A15 Bionic, of course, means improved picture processing.

Apple is releasing a new Cinematic Mode for capturing video to that purpose. It records in Dolby HDR and has a new auto (or manual) rack focus mode that allows you to alter focus after you’ve taken a picture. Photographic Style is a new attribute that will enable us to customize one of four different styles that will be put in.

They are making even more improvements to the iPhone 13 Pro and Pro Max. Night Mode is now available on the new telephoto camera, which has a 3x zoom (77mm). Apple state that the UltraWide camera’s f/1.8 aperture and autofocus increase low-light performance by 92 percent. According to Apple, the regular 12MP wide camera has 1.9-micron pixels and an f/1.5 aperture, which together provide a 2.2x enhancement in less light. The new lens can focus in close to the proximity of 2cm. It allows for much better macro photography.

Apple added ProRes recording to the iPhone 13 Pro with iOS 15.1, thanks to enhanced hardware-accelerated encoding in the A15 Bionic. You’ll be able to record ProRes video in up to 4K at 30 frames per second.

Also Read: How To Set Up Your iPhone 13 For Gaming

The new OLED display on the standard iPhone 13 equals the performance of the iPhone 12 Pro from last year. The brightness is up to 800 nits (up from 625 on the iPhone 12) and 1200 nits with the content of HDR (the same as before). The better power utilization of these new panels, according to Apple, allows them to maintain peak brightness for longer.

The basic display brightness of the iPhone 13 Pro and Pro Max reaches an extent of 1000 nits (up from 800 in the iPhone 12 Pro). Like the iPad Pro, the iPhone 13 Pro versions now offer ProMotion, allowing varied refresh rates ranging from 10Hz to 120Hz.

Apple claims the A15 is the fastest smartphone CPU ever but doesn’t specify performance figures. According to Apple, it still boasts a 6-core CPU with two high-performance cores and four high-efficiency cores, which are up to 50% quicker than the fastest rival smartphone chip. According to Apple, the 5-core GPU is up to 30% quicker than any competitive smartphone SoC. The Pro versions ‘ graphics performance will be slightly superior because the iPhone 13 and iPhone 13 mini only have a 4-core GPU.

All iPhone 13 models have larger batteries than their iPhone 12 counterparts, according to Apple. The batteries have a 10-15% higher capacity (depending on model) and are complemented by a slew of additional enhancements like as more power-efficient screens and networking components. The option of ProMotion to use a lower refresh rate is also a huge plus for the Pro models.

As a result, the battery life is exceptionally long, frequently hours longer than the similar iPhone 12 model. If you’re upgrading from an earlier iPhone, you’ll be surprised to learn that Apple’s battery life has nearly doubled in the previous three years.

Also Read: How To Fix No Sound In Calls On iPhone 13

The iPhone 13  may not appear to be all that different from the iPhone 12 (save for the new camera lens configuration), but it’s a superior flagship in every way. Some may consider it a minor improvement over the iPhone 12, but it has a lot going for it.