How To Run Windows 11 On Mac

Microsoft has officially released the much-awaited Windows 11 on 5th October 2021 and it is available as a free update for all Windows 10 users. It is also possible to install Windows 11 on an unsupported PC with some workarounds. However, the looming question is how Mac users can run Windows 11 on their devices to get the best of both worlds. But what first needs to be answered is that whether Mac will be able to support Windows 11? Let’s begin finding an answer to all these questions.

Also Read: How To Speed Up Windows 11 PC

As you might be very well aware, there are several ways through which it is extremely easy to run Windows 10 on Mac, Boot Camp being the most popular one. But there is a different story with Windows 11!

Windows 11 requires a physical TPM module to be able to run on a computer. The Trusted Platform Module (TPM) 2.0 required to run Windows 11 is integrated into the motherboard of the system. This module guarantees that the security features of the Windows 11 Operating system are not disrupted. This is such a crucial requirement that even the Windows PC launched before 2013 will not be able to support Windows 11 due to the lack of TPM 2.0.

Although theoretically, some Intel-powered Mac has a Trusted Platform Module built into their processor which in turn should be able to hold up Windows 11, it’s not so. Let’s see why!

Following Intel-powered Macs have a TPM integrated into its CPU which are being claimed to support Windows 11:

But there is good news! A virtual environment known as Parallels lets you install and run Windows 11 on an Apple desktop. It works extremely well for both Intel-powered as well the newly launched Silicon M1 Macs, M1 Pro, and even M1 Max chip Macs but there are some limitations! Let’s look at those a little later. 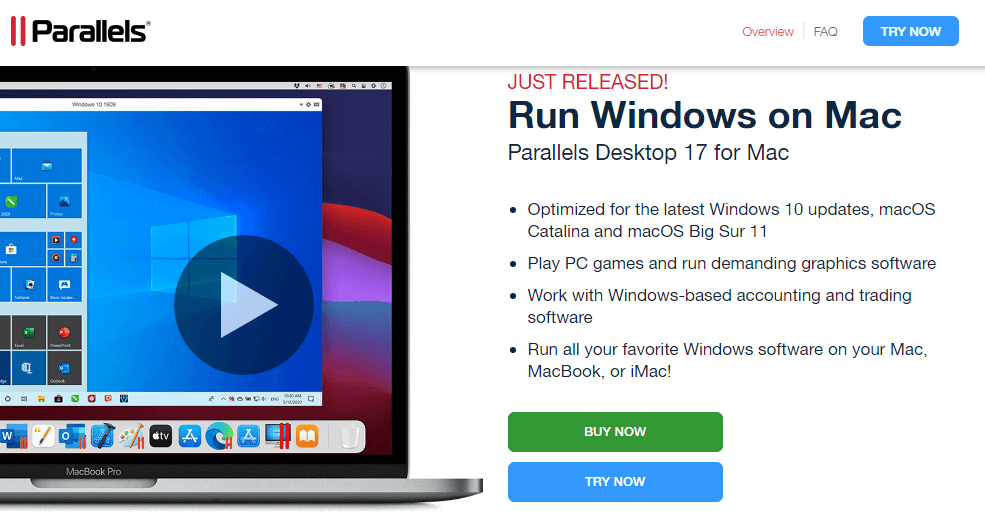 This Virtual Environment stimulates the virtual TPM module on both Intel-powered as well as M1 chip Macs so that Windows 11 can run on it without any hassle. The Professional Version of Parallels has had a TPM module integrated into it for quite some time. But recently, Parallels has also included the TPM module in its Standard Version to make it easy to run Windows 11 on it.

Note: Some of the tech websites are providing unethical workarounds to detour Trusted Platform Module requirements so that it is easy to install Windows 11 on your Mac without TPM. One of such ways is to use an altered ISO image of Windows 11.

It is advisable not to follow such unauthorized ways to run Windows 11 on Mac since the operating system will be corrupted whenever news updates of Windows 11 or macOS are released in the future. Moreover, it will be laborious to install new Windows 11 updates on the OS running on Mac through the modified ISO image method. With that being said, let’s know a little about Parallels and see how to use it to install Windows 11 on Mac.

Also Read: How To Flush DNS Cache In Windows 11

How To Install Windows 11 On Mac through Parallels

Parallel Desktop 17 is a very powerful application that can cleverly emulate a virtual environment with TPM so that it is easy to run Windows 11 in parallel to MacOS. You can also run any other operating system on Mac within a virtual world. Parallels is a very feasible option for professionals and students who need to use both Mac and Windows applications but are unable to afford both desktops separately. Parallels is not a free application but it gives you are a trial period. 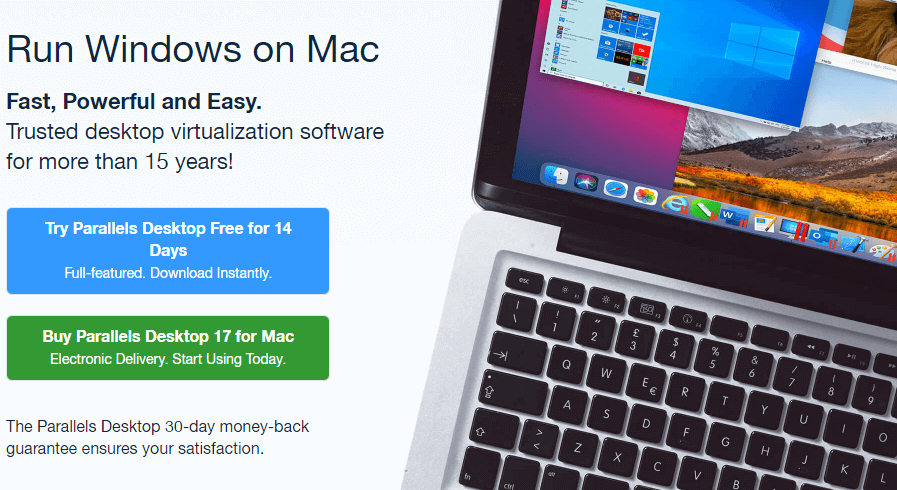 Additionally, students can enjoy a reasonable discount on purchasing the application. We’ll talk about it later. Let’s begin the installation process of Windows 11 on macOS using Parallels Desktop 17!

First of all, you need to download and install the Parallels Desktop application on your Mac. If you’ve already done it, move ahead to the next step of the Windows 11 installation guide but if you do not have access to it, you can visit the official parallels website and download a free trial version. In the trial version, you are free to use and test the software for 14 days. The version is completely unrestricted which means you have access to all its tools and features without spending a single dime for fourteen days. We’re assuming you’ve already downloaded the Parallels trial version so we’re moving to the next step.

Also Read: How To Share Files Via Nearby Sharing In Windows 11

After installing Parallels on your Mac, the next thing to do is to download Windows 11 from the official download page. On the official website, you’ll come across the Disk Image for Windows 11. You can set up a virtual environment in Parallels, create an installation DVD or a USB drive through this ISO file.

Simply visit the official Windows 11 download page and navigate to the Windows 11 Disk Image (ISO) section. Now choose Windows 11 from the download menu. If you want to change the official language other than English, you can do it from the languages dropdown. After tweaking the settings, you can click the Confirm button. Finally, press the 64-bit Download button to begin the installation process.

The Windows 11 Disk Image (ISO) file is over 5GB; hence it might take some time to get downloaded. However, the duration depends on your internet speed. Once the Windows 11 download process is complete, let’s head to the installation process of Windows 11 on Virtual Machines using Parallels.

Also Read: How To Install Windows 11 On An Unsupported CPU?

For this, launch Parallels on your Mac and click the File menu. Click the New option from the menu and you’ll see an Installation Assistant window on your screen. Now click on the ‘Install Windows or another OS from a DVD or image file’ tab and click the ‘Continue’ button to confirm. 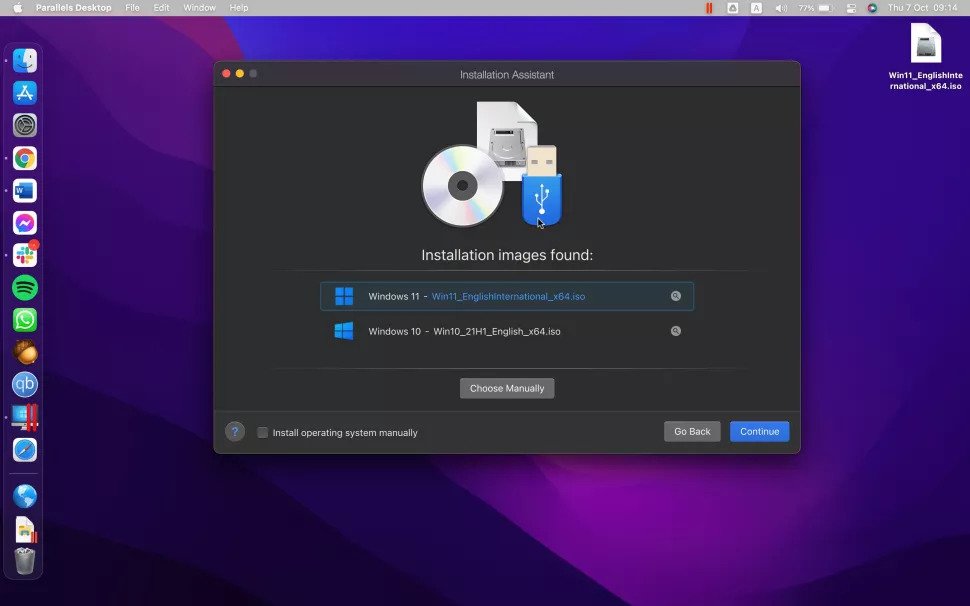 The installation assistant will hunt your hard drive to locate the relevant ISO file. Hence, it will automatically pick the Windows 11 disk image just saved on your Mac. By any chance, if Parallels fails to automatically load the ISO file, you needn’t worry! You can press the ‘Choose Manually’ button and browse the ISO file in the Installation Assistant Window. You can also drag and drop the disk image in the Installation Window. Click the ‘Continue’ button after the correct Windows 11 ISO file is picked up in the window. Note: If you have more than one ISO file on your storage device, Parallels’s Installation Window will be confused as to which ISO has to be used at the moment.

Also Read: How To Check If Your PC Can Upgrade To Windows 11? 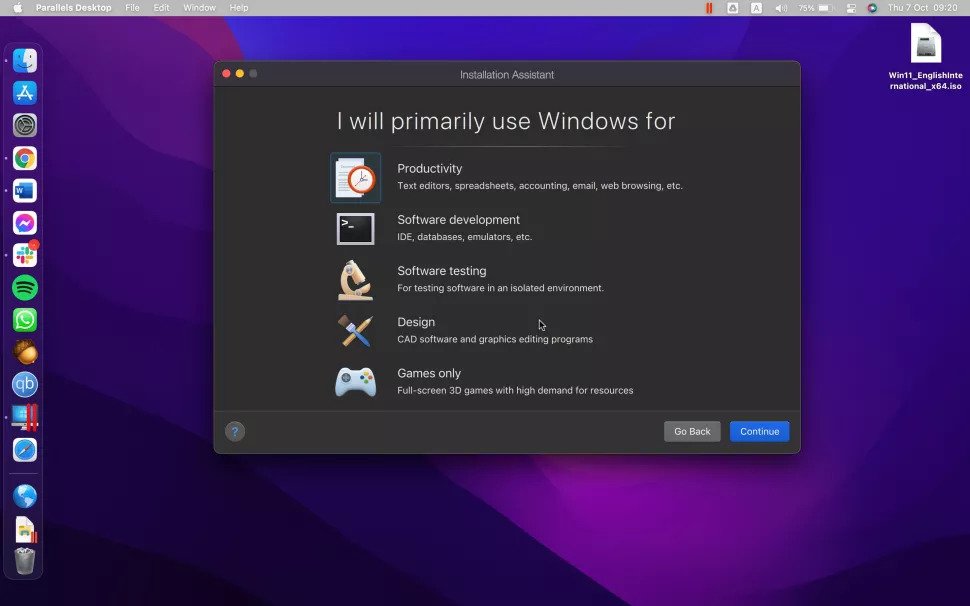 The installation assistant will also ask you the primary reason behind using Windows on a virtual machine. You can choose one from the given options. Based on your answer, Mac will dedicate the resources to the virtual operating system you’ve just installed. Next, select the ‘Customize settings before installation’ and click Continue. 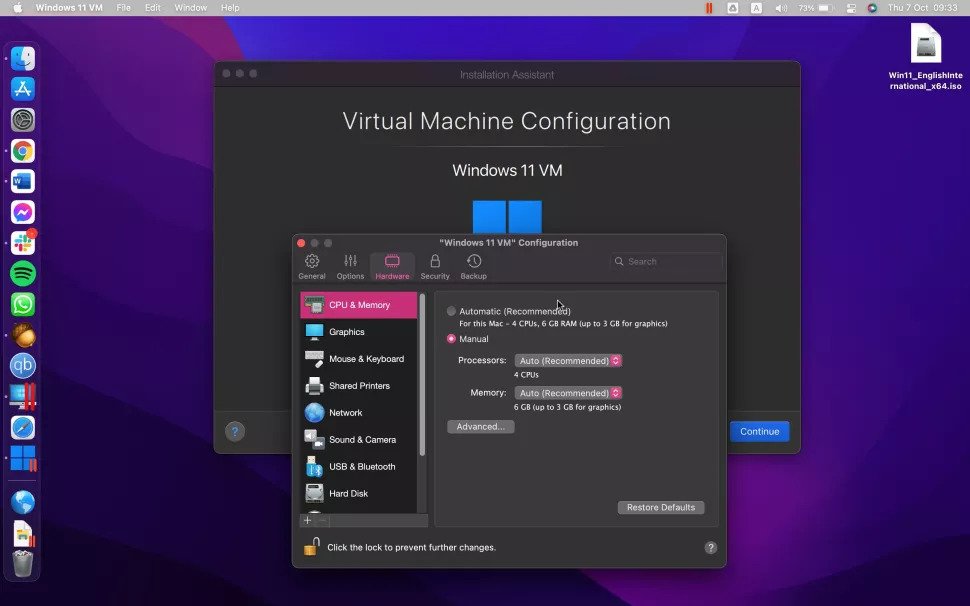 To customize the memory resources dedicated to Windows 11, head to the ‘Hardware’ settings. Here you can also specify whether to use Webcam with Windows 11 or not.
After configuring the installation, close the window and click ‘Continue’. Now simply follow the on-screen steps and you’ll reach the step where you will be asked to create user accounts and modify a few basic settings.

Finally, launch and access Windows 11 in the Virtual Machine by clicking the Launch option in Parallels Control Center.

Limitations of installing Windows 11 through Parallels

As mentioned above, Windows 11 needs a tangible TPM 2.0 to ensure platform integrity but the M1 chip-powered Mac does not support it. But Parallels is here for the rescue! The virtual machine can skilfully imitate the Trusted Platform Module and enable you to run Windows 11 on Mac.

Parallels 17 can assist you to successfully run Windows 11 on M1 Macs but with some limitations. You can only run the Windows 11 Insider Built Preview Versions released for ARM (Advanced RISC machine) through Parallels.

Unfortunately, Parallels does not support the official standard Windows 11 x86 Version currently. But we have high hopes it will do it soon in near future. The Windows 11 release for Windows ARM and standard Windows are quite alike but there is a difference. Since Windows ARM only runs with ARM (Advanced RISC Machine) chips, you will only be able to run a few software and applications on it. In other words, only those applications will be supported on Windows 11 running on Mac which will be compatible with Windows ARM.

Sadly, Parallels is the sole method of running any Windows version on M1 Macs since Boot Camp is not supported on Macs using M1 chips.

If you’re a student, you can avail a discount for downloading and using the standard version of Parallels to run Windows 11 on a Mac. Student Version of Parallels costs 50% less than the total price of the Standard Version. You just have to pay $39.99 instead of $79.99. 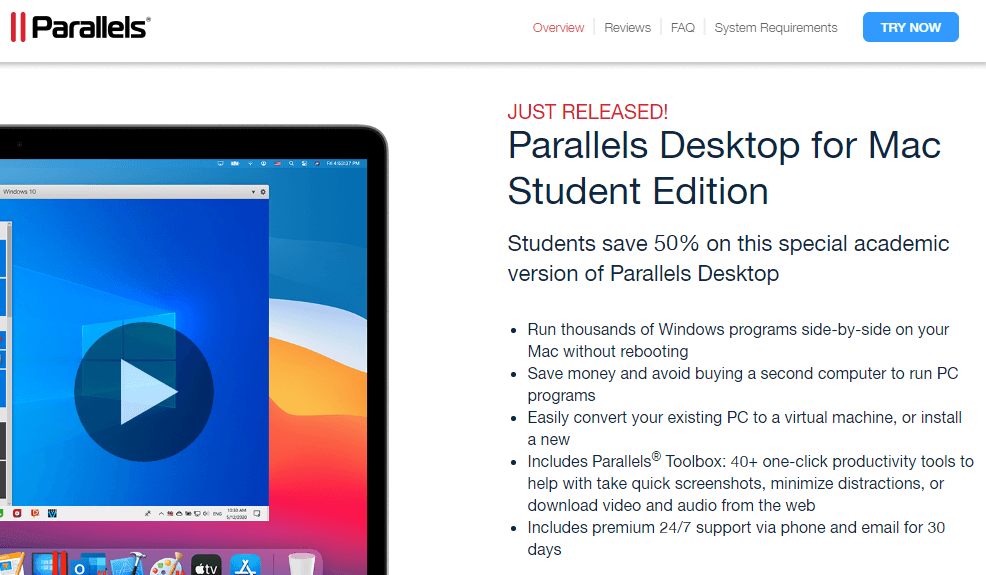 However, the student version of Parallels is only available in the United States, Canada, Australia, Germany, Korea, Japan, and United Kingdom. You also need to give proof of your eligibility to avail of the Parallels version.

Is it safe to install Windows 11 on Mac?

Absolutely no risks are involved in installing Windows 11 on your Mac. When Windows 11 is installed on Mac, it runs either on an isolated virtual environment or a separate partition on the hard disk.

This procedure is also very effective in separating the Mac from the potential threats prevailing in Windows such as adware, virus, and worms. In other words, even if the Windows 11 running on Mac catches malware somehow, it wouldn’t be able to harm your macOS. You will have to uninstall Windows 11 and then reinstall it back.

On the other note, installing Windows 11 on Mac is just like a piece of cake. Thanks to Virtual Environments like Parallels it’s even easy for amateurs to install Windows 11 on Mac. However, to be on the safer side, it is advisable to back up your macOS device on any external storage device before commencing the Windows 11 installation process.

Further, if you have the slightest doubt that installing and running Microsoft’s operating system on Mac is unlawful, let’s clear the air!

It is absolutely legal to install and run Microsoft’s Windows 11 on Mac or even in parallel to some other operating system. Apple has always encouraged running previous versions of Windows on its hardware through the Boot Camp method on Intel-powered Macs. Likewise, Windows End User License Agreement (EULA) does not object to the installation of any version of Windows on Mac through any of these ways.

Microsoft’s Windows 365 is a cloud-based service that allows Mac owners to run Windows on any browser using internet connectivity. This exciting new service by Microsoft has been released on August 2nd, 2021 but it’s currently available for businesses only. But we can hope that Microsoft might allow Windows 365 for all Mac users in the upcoming months.