How To Disable Modern Standby In Windows 10 And Windows 11

PCWindowsHow To Disable Modern Standby In Windows 10 And Windows 11
May 2, 2022 4:1 pm
By Harshaurya Kaur

This article explain you to Disable Modern Standby in windows 11 or 10. There are two power models for PCs in Windows 10 and Windows 11: S3 and Modern Standby (S0 Low Power Idle). The S3 power model is an obsolete standard that modern consumers expect cannot provide the instant-on. Current Standby can take advantage of a modern chipset’s features and can be used on a wide range of tablets and PCs. Connected Standby was the initial incarnation of Modern Standby, which debuted in Windows 8 and Windows 8.1. Modern Standby builds on the Connected Standby idea introduced in Windows 8.x by allowing for component selection freedom and the ability for the OS to handle network connectivity while in Standby.

Also Read:How To Turn On Or Off Auto HDR In Windows 11? 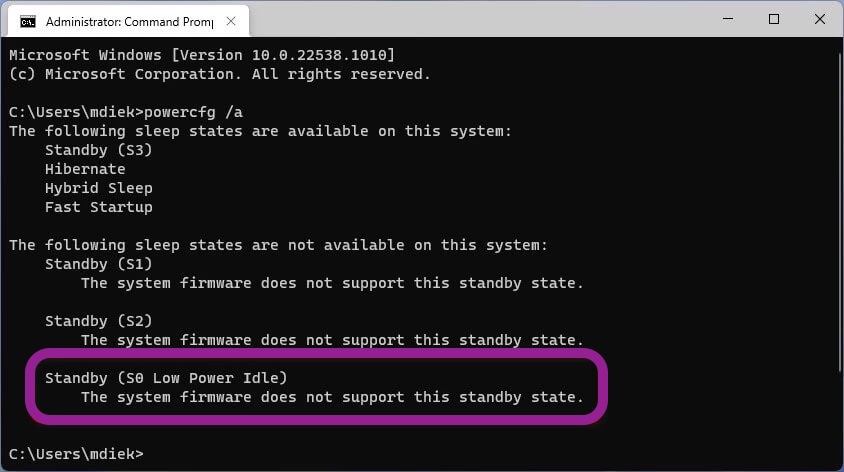 Modern Standby, like Connected Standby, provides a fast on/off user experience, but it is more encompassing than the Windows 8.1 Connected Standby power paradigm. Thanks to Modern Standby, market sectors previously restricted to the Traditional Sleep (S3) power model can now benefit from the low-power idle model. Systems based on rotational media and hybrid media (for example, SSD + HDD or SSHD) and/or a NIC that does not fulfil all of the previous Connected Standby requirements are examples.

To allow network connectivity during Standby, modern standby systems can be connected (enabled), detached (disabled), or managed by Windows. The hardware and/or the configuration dictate this behavior.

The system remains in S0 when in Standby on any Modern Standby system (connected or detached). Allowing the following situations to work:

On devices connected while on Standby, the operating system may additionally trigger wakes depending on certain network patterns to allow apps to receive the most recent content, such as incoming email, VoIP calls, or news items.

Follow these steps to turn off Modern Standby in Windows 11 and Windows 10.

Commands to disable modern Stand By

The following reg commands are the quickest approach to disable Modern Standby in Windows 11 and Windows 10.

To begin, hit Win + X and then select Windows Terminal (Admin) from the option that appears.

Next, select Command Prompt from the down-arrow menu or by pressing Ctrl + Shift + 2. (see the screenshot).

Finally, run one of the commands below:

Also Read: How To Customize OEM Support Information In Windows 11

That’s a simple task. The commands above have been tried on devices with Intel CPUs, and they function well. So that’s how you find Modern Standby on your Windows 11/10 computer. This is fairly straightforward and only requires one command to be entered into any of your Windows PC’s terminal applications. The command’s output immediately displays which sleep modes your device supports and which it does not. To use Modern Standby mode, check Standby (S0 Low Power Idle) is include in the list of available sleep modes.

How To Setup Smart Card To Sign In Windows?

45+ Must Use Tips And Tricks For Windows OS

How To Create And Use Password Reset Disk In Windows 11