Apple’s Worldwide Developers Conference (WWDC) is typically used to introduce upgrades for software products. However, at the event that took place in 2022, Apple announced not just a new MacBook Air but also the M2 chip that would be found inside of it. So let’s look into the specifications of Macbook Air M1 VS MacBook Air M2. 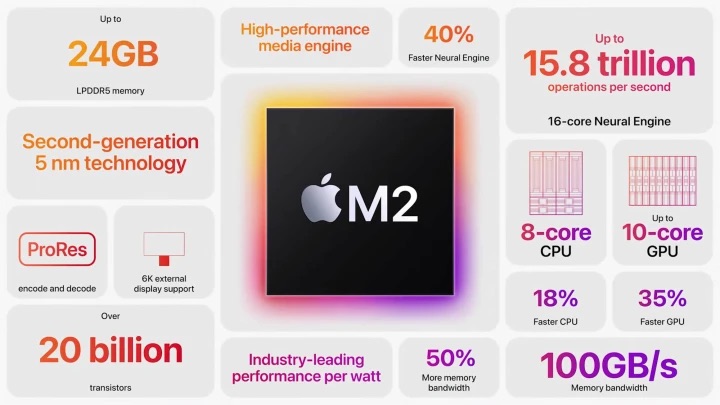 After a long period of anticipation, Apple finally presented the next generation of its M-series processor, which is called the M2. Apple also updated the MacBook Air’s chassis and display. In comparison to its predecessor, the M2-powered MacBook Air features much more. It has refined the “pro” design, enhanced internals, and a host of other enhancements. However, Apple has decided not to discontinue the M1-powered MacBook Air, which is already two years old.  Instead, the company will continue to sell it, albeit at a price that is somewhat more than that of the new MacBook Air.

Also Read: 4 Techniques To Fix No Audio On WhatsApp Desktop On Macbook Air

Which One To Choose MacBook Air M1 VS Macbook Air M2?

In most cases, it is simple to advocate for purchasing the newer model rather than the older one. However, here, the M2 MacBook Air appears to be more of an entirely new model than a replacement for the previous one. The answer to the question of which MacBook Air model you should purchase is not a cut-and-dry one because Apple still offers sales of the first-generation M1 MacBook Air. Therefore, the question that arises is which model of the MacBook Air should you go with. Is the older model equipped with the M1 chip or the newer model powered by the M2 chip, which includes more features but comes at a higher cost? Let’s put them side by side and see which one is the better option for you.

The recognizable wedge form that the original Air was known for, has been completely eliminated in the new MacBook Air M2. Instead, the sides of the M2 variant are squared off, and the corners are rounded. It now resembles itss bigger brothers, the MacBook Pro 14-inch and 16-inch. The MacBook line has become more uniform as a result, despite the fact that it has a less distinctive appearance (and is even thinner).

The new M2 MacBook Air chassis maintains its namesake by weighing only 2.7 pounds and having a thickness of 0.44 inches, and it also continues to live up to its name. It is ideal for people who value portability more than sheer power, however, it does have plenty of raw power as we will see in the following section. It is important to note that the difference between the M1 and M2 MacBook Air in terms of weight is only 0.1 pounds.

The keyboard on the M2 edition of the MacBook Air is not significantly different from the keyboard on the M1 model. It does appear to be more in line with the keyboards on the bigger MacBook Pro models. This pertains to the Touch ID button, which looks a little bit different than the one on the M1, as well as the full-size function keys that run down the top.

On the M1 MacBook Air, the stereo speakers are located on either side of the keyboard. On the M2 MacBook Air, however, the four-speaker configuration is located in the space in between the keyboard and the hinge. This new speaker arrangement also features support for Spatial Audio, which is accomplished both via the use of Dolby Atmos in the speakers that are built-in and through the utilization of dynamic head tracking with the premium Apple AirPods products.

The screen on the M2 Air is marginally larger than the one found on the M1 Air. Currently, measuring 13.6 inches in width as opposed to 13.3 inches. This shift is the result of a reduction in the size of the bezel along with the top and side corners as well as at the bottom. That translates to the fact that the new MacBook Air M2 does, in fact, have a notch. On the other hand, the previous model did not. The screen’s four upper corners likewise have rounded edges like the rest of the screen.

The webcam has been upgraded to 1080p from 720p, which was the maximum resolution available on the previous generation of MacBook Air (M1). Because it allows you to use your iPhone as a webcam, Apple’s new Continuity Camera, which is compatible with the M1 MacBook Air, can persuade you to utilize it. It’s quite unlikely that you’ll need to do that on the M2 MacBook Air.

Apple claims that this new display is the largest and brightest that has ever been featured on a MacBook Air. The panel itself has also been improved to a 2560 x 1660 Liquid Retina display. The Liquid Retina display is unquestionably an improvement over the M1 MacBook Air, but you shouldn’t anticipate it to have the same jaw-dropping appearance as the Super Retina XDR display seen on the iPad Pro and MacBook Pro. The Super Retina XDR display is a mini-LED screen (14-inch and 16-inch).

This display is capable of displaying up to a billion different colors and has had its brightness boosted to 500 nits. When compared to the 400 nits that are attainable with the M1 MacBook Air, this is a significant improvement. The True Tone technology is present in both displays.

Both the M1 and M2 models of the MacBook Air share the same port configuration, which consists of the following: Two Thunderbolt 3 ports that are backward compatible with USB 3.1 Gen 2 and USB 4 speeds. However, each of these devices is only capable of supporting a single external display at a time.

In contrast to the M1 MacBook Air, which lacks this feature, the M2 MacBook Air comes equipped with a combo headphone mic jack. This mic jack, according to Apple, is capable of supporting high-impedance headphones.

The MagSafe 3 magnetic charging connector is exclusive to the M2 model, which is the only significant variation between the two versions. That alone is sufficient justification for some individuals to purchase a new MacBook Air. The primary advantage is that it releases one of the two USB-C ports. This is so that it can be used for something other than charging devices. However, there is no need to panic. You can still charge the laptop by making use of the Thunderbolt connectors.

The Wi-Fi 6 wireless protocol and Bluetooth 5.0 are both supported by both of these portable computers as well.

The M2 chip is housed inside the newest iteration of the MacBook Air. This is what differentiates it from the model that came before it. There are some addition to the display and the general design.

The M2 model of the MacBook Air does not have a fan, just like the M1 model had. This is due to the power efficiency of the M2 chip. Apple claims that the M2 processor is up to 1.4 times faster than the M1 model, yet it still has the same capacity to last for up to 18 hours on a single charge.

A boost in power that is 1.4 times more than before is measurable, but it is not all that significant. In point of fact, it appears that the M2 is more of a refinement of the M1. Despite this, the M2 MacBook Air has improved performance as a result of its production on a “second-generation 5nm” fabrication node.

When compared to the M1, this results in a CPU that is 18 percent quicker overall. It has a GPU that is 35 percent faster, and memory bandwidth that is 50 percent higher. Which makes a total reaching up to 100 gigabytes per second.

Importantly, in contrast to the M1 MacBook Air, the M2 MacBook Air has more features. It comes equipped with a media engine that is identical to the one found in the 14-inch and 16-inch MacBook Pros. The media engine comes with support for hardware-accelerated encoding and decoding of ProRes files.

It goes without saying that the M2 will provide you with enhanced performance. Suffice it to say, however, that you will benefit from the M2’s enhanced capabilities.

While you are limited to a maximum of 16GB of RAM on the M1 MacBook Air.  The M2 MacBook Air gives you the option of configuring your laptop with an additional 8GB of RAM. This brings the total to 24GB. The storage capacities, on the other hand, are equivalent and begin at 8 GB and go up to a maximum of 2 TB.

There are two storage capacities available for the MacBook Air M2: an 8-core GPU and a 10-core GPU. The  MacBook Air M2 with an 8-core GPU is available for Rs 1,19,900. This price is for its most basic configuration, which comes with 256GB of storage and 8GB of RAM. In the meantime, the 10-core GPU version maintains the same amount of RAM (8 GB). Although, the price increases to 512 GB and increases the price to Rs 1,49,900. At the same time, the most expensive model, which includes every available upgrade, will set you back Rs 2,49,900.

The first generation of the MacBook Air was already an extremely competent piece. It has solid hardware for general computer tasks, increased productivity, and even video editing. Those who already own an M1 Air, do not require an update. Unless they have a compelling desire to obtain the MagSafe port.

Having said that, the M1 MacBook Air is still fairly quick for the majority of users, which is a testament to Apple’s superior engineering capabilities.