How To Use Snap Layouts In Windows 11

Microsoft’s Windows 11 is the upcoming version of Windows which is better known for the fresh design with round bordered windows and centered taskbar. Additionally, special focus has been given to enhance productivity and usefulness. In the same context, Windows 11 will feature the new Snap Layout or Snap Assist ability. This revolutionary user interface redesigning will find itself useful in assisting the users to keep the desktop tidy by managing and organizing the program windows.

Snap Layout is a productivity tool in Windows 11 that will assist Windows users to organize the app windows systematically on the screen. This feature will help to de-clutter the desktop and help users to easily access the required window without getting caught among the app windows flying here and there.

No matter how new this feature seems to you, its roots belong to the beginning of the Windows venture. To avoid the intellectual property issue by Apple, Microsoft decided to drop the idea of creating floating and overlaying app windows. Hence, the windows were designed to be full screen or occupy the available space when other windows are also open on the screen.

The Snap layout feature first existed as ‘Aero Snap’ on Windows 7 and was improved in Windows 8.1 to even allow the ‘Metro’ Style Store Apps to occupy half of the screen and re-arrange themselves automatically.

Also Read: How To Update Apple iOS 14.8 In Your Devices -Apple Security Update 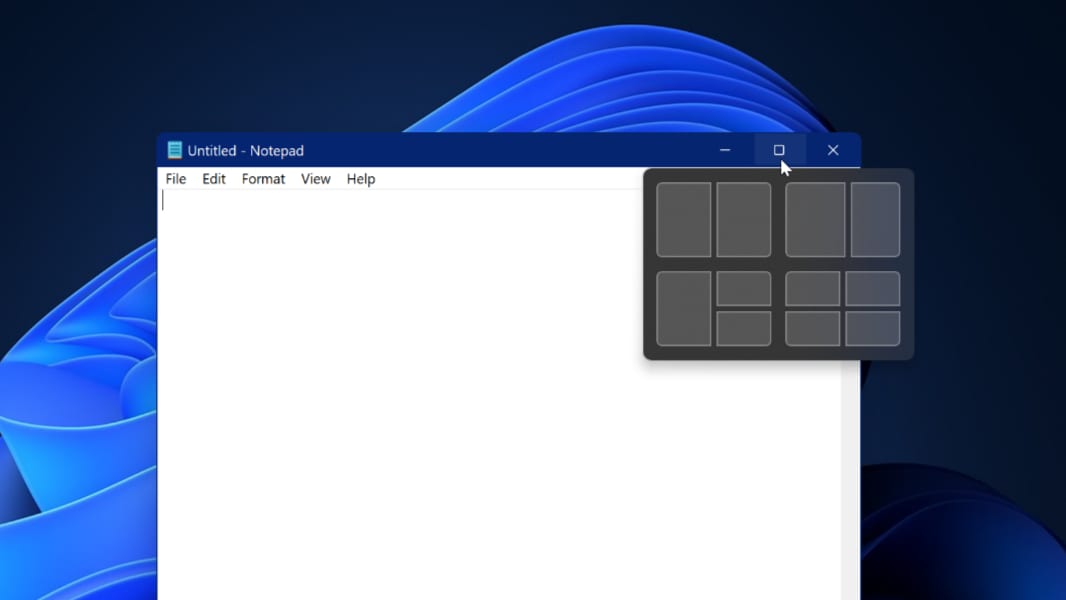 This feature was revamped in Windows 10 as ‘Snap Assist’ which displayed the thumbnails of open windows and allowed displaying two windows side by side. You could also snap the windows up to the corner of the desktop screen and they occupied 25% of the available screen space.

Also Read: Cool YouTube URL Tricks You Should Know About

Microsoft has designed a nifty ‘flyout’ that will allow you to choose a layout as per your need. Just ‘hover’ the curser over the maximize button present on the Window’s title bar.
Once you’ll ‘hover’ the button, pause for a moment without clicking it. You will see that the pop-up menu will be available on the screen.

Now you can click on the ‘layout style’ depending on how you want to organize the open windows on the screen.

When you arrange all the windows in the available slots by tapping the thumbnail, the Snap Layout will be activated.
The chosen layout will stay in place until the window is resized or pick a different layout is chosen.

Even if you minimize the snapped windows, they will stay within their snapped region and will re-occupy their place as soon as they return to the maximized position.

Alternatively, you can also hit the Windows key along with ‘Z’ to quickly access this pop-up.

Also Read: How To Take Screenshots In Windows 11

Windows 11 has six Snap layouts that are useful for multitasking purposes. You can try all the layouts and pick the one which suits you best.

This layout arranges the two apps alongside each other. To quickly access this layout, use the ‘Windows+Left Arrow’ or the ‘Windows+Right Arrow’ keyboard shortcuts

This layout is best if you are working on one main app.  The main app can be tiled on the left and another window can occupy one-third of available spaces.

This layout divides the screen into three equal size vertical spaces which can be occupied by three windows. This layout is best for three app windows of equal importance.

One Large Window on Left, Two smaller Windows on Right

The screen is divided into one primary window and two smaller windows. The primary window occupies the left side of the screen. The free space on the right side is taken up by the remaining two apps.

This layout divides the screen into four equal-sized grids. Four windows can be arranged on each quarter of the screen. This layout is also available on Windows 10 Snap Layout.

Three Vertical Windows with the Largest Window in Centre

Using this layout, you can arrange three app windows alongside the screen. Two windows on the extremities occupy equal space and the wider window is arranged in the center of the screen.

That’s all about the Snap Layout feature in the upcoming Windows 11. The official version of Windows 11 will not be available until mid-October. However, you can still use Windows 11 Insider Preview Build 22000.176 released for Dev and Beta channels.

Also Read: How To Review And Delete Your Alexa History And Recordings

How To Force Subtitles In An Embedded Youtube Video

How To Fix Kodi Not Starting In Windows 11