How To Edit And Enhance Voice Memos on iPhone and iPad

The Voice Memos app has been a part of iOS since the iPhone’s inception, and it allows you to record small voice notes and reminders, as well as longer audio such as interviews.

Despite their intended usage, there was no way to improve the quality of these recordings until recently without exporting the audio file to another programme. However, starting with iOS 14, you may use the Voice Memos app to enhance an iPhone voice memo with a single tap.

Any modifications are completely reversible, and you can hear them right away. You may also go back and turn to Enhance on or off at any time.

The option to enhance audio recordings produced in the Voice Memos app is one of the modest changes made by Apple in iOS 14 that aims to improve the quality of your recordings. It accomplishes this by employing machine learning to eliminate potentially objectionable sounds like background noise and echoes.

Consider it the audio counterpart of the Photos app’s magic wand button, which improves the image’s quality. The effect won’t always be dramatic, and it might not even be ideal for what you’re recording, but it’s worth a shot, and you can quickly delete it if you don’t like it.

Here’s how to make your voice memos even better.

You will generally hear a difference if you now tap the Play icon in the recording’s entry in the list. Your outcomes will differ, and they may differ dramatically.

Enhance Recording attempts to filter out anything you don’t want to hear while keeping everything you do want to hear using Machine Learning. As a result, it can eliminate or at least decrease sounds like background noise.

Similarly, it will make every effort to eliminate room reverberation. That’s the faint echo you can’t hear in the room but which is faithfully recorded when it bounces off the walls and into the microphone.

You will see a significant improvement, but don’t believe us when we say that. You may not notice any difference at all as often as you hear a big difference.

The worst-case scenario is that you don’t like what you hear. In that scenario, you’re in luck because this functionality has one additional component: an undo.

You may go back to an improved recording at any time and erase the enhancements, unlike with a conventional undo, where you might have to remember to pick it right now.

Also Read: How To Use Emoji As Apple ID Picture

What is going on with improve audio?

The ease with which you may add and remove it, as well as the fact that you don’t have to wait for the audio to be evaluated, makes Enhance Recording appear to be a filter. It’s like to smearing a gauzy hue over a photograph and then erasing it later.

When you share the audio, the improved recording is delivered unless the Enhance Recording icon is highlighted. It is not necessary for your receiver to have Enhanced Recording, iOS 14, or Voice Memo.

Also read: How To Send ‘Soundmojis’ On Facebook Messenger

Voice Memo Enhancements: How to Get Rid of Them

When all of the following processes are completed, the audio will sound exactly like the original recording.

The Voice Memos software saves all of your deleted recordings in a separate folder called “Recently Deleted.” As a result, any mistakenly deleted memos on your iPhone can be simply recovered. 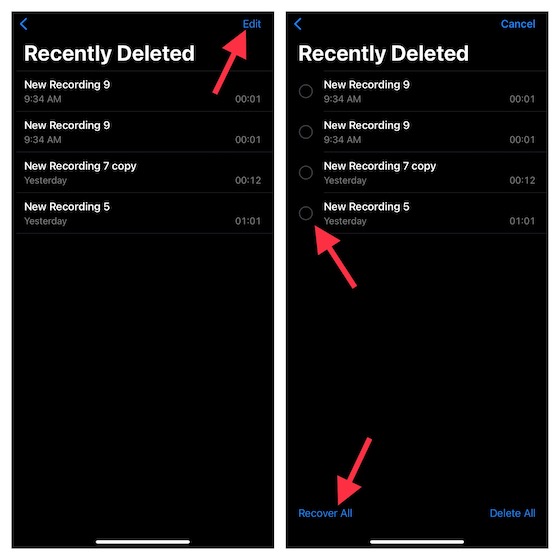 2. Now, go to the upper right corner of the screen and click Edit. Then, select the desired recording and press the Recover option. If you wish to retrieve all of your deleted memos, go to the bottom left corner and hit “Recover All.”

On iPhone and iPad, you can separate the audio from the voice memo.

If you ever want to be a little more creative with your voice recordings or want to use the audio with more flexibility, the Voice Memos app on your iPhone can help you out.

4. Be careful to touch Done at the end to confirm the changes.

That concludes our tutorial on how to edit and improve your voice memos on the iPhone and iPad. As I previously stated, the Voice Memos app has considerably improved since iOS 15 introduced some handy editing capabilities. While I like the enhancements, there are a few additional features I’d want to see in the app sooner rather than later. First and foremost, I wish we had more control over noise reduction via a slider (pretty much in the tune of the playback speed slider). Second, I’d like the Voice Memos app to be more tightly connected with third-party programmes so that audio can be smoothly imported and exported to GarageBand or other audio editing software.

4 Ways To Fix “iPhone Is Disabled Connect To iTunes” Error

How to Hide Files And Folders From Search In Windows 11

Ekta Pandey - January 19, 2022 6:1 pm 0
The experience of your Windows 11 PC not waking up from long sleep can be horrible and frustrating at the same time. You have...

How To Fix Macbook Air M1 Randomly Shutting Down Issue

Taiba Hasan - January 20, 2022 1:1 pm 0
Keep reading to know about different ways that can fix the Macbook Air M1 randomly shutting down the issue. You’re here because lately, your Macbook...

Harshaurya Kaur - January 17, 2022 3:1 pm 0
Fix Game Stuttering On Windows 11 Microsoft has worked very hard to get people to play games on their Windows 11/10 PCs. Players get something...

How To Change Name Of User Profile Folder In Windows 11

Ekta Pandey - January 19, 2022 11:1 am 0
This article will walk you through the steps to Change the Name of the User Profile Folder in Windows 11. Indeed, Changing the Username or...
Load more