Everything About Continuity Camera Feature In macOS Ventura

macOS Ventura is already available for Mac users and has introduced several revolutionary features in the Apple ecosystem. Continuity Camera is one such feature that allows you to set up video calls from your Mac by using your iPhone as the primary camera. The Continuity Camera utilizes the handoff feature of the Apple devices and offers a slew of advantages over conducting video calls over the default webcam. If you are interested to learn about the Continuity Camera feature, you are at the right place. In this article, we will explain everything that you need to know about Continuity Camera. Let’s get started.

Prerequisites for Continuity Camera to work

Listed below are the requirements that need to be fulfilled to use the continuity camera:

How to Enable Continuity Camera feature

Features and Limitations of Continuity Camera

The continuity Camera feature was used to add quality to the video calls conducted over Mac. Let’s see how Apple users will benefit from this feature:

While this feature delivers a seamless experience, it still has a few limitations.

Having said that, let’s see how to use the Continuity Camera feature on your iPhone.

How to Use Continuity Camera on Mac

Let’s see the complete step-by-step procedure to use iPhone as a Mac camera using the Continuity Camera feature: 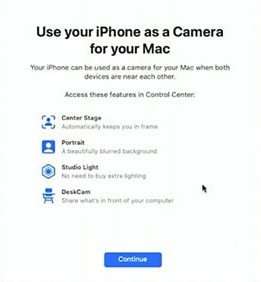 Also Read: Why macOS Ventura Is Important to Install

Now that your iPhone is all set up, you are ready to use your iPhone camera as a webcam. Now when you will call over FaceTime, the video feed captured by your iPhone will be displayed to the other person. Whenever you need to disconnect your iPhone during FaceTIme, simply access the View Tab from the menu bar once again and choose Mac’s camera this time.

Note: To use an iPhone instead of Mac’s webcam for video calls on Zoom, Google Meet, and others, access the Settings of the Video Calling app and choose iPhone in place of the webcam.

When using the iPhone camera instead of the Mac, you can choose video effects from the Control Center. To be able to use these video effects, you first have to enable them. Here’s how: 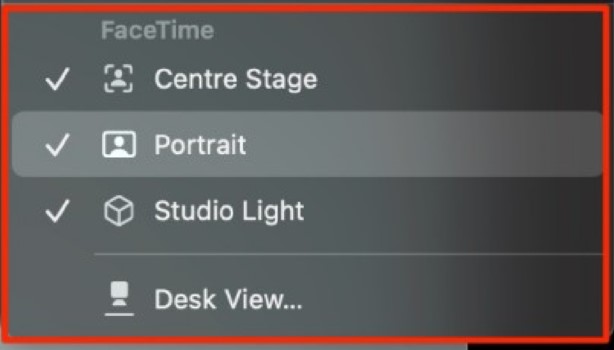 Note: If you are using Desk View, place your iPhone on top of your Mac to get a large view of the bottom.

That’s all you need to know about the Continuity Camera feature which is introduced in the macOS Ventura version. Thanks to the Camera Continuity feature, it is now possible to use your iPhone as a webcam while conducting video calls on your Mac. If you have any queries in this regard, feel free to reach out to us.

How To Change The Startup Screen In macOS Ventura